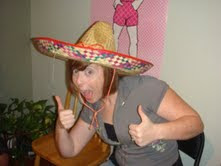 Heather Trese (who sent me two pictures to choose from… really, Heather, was there ever a chance I wouldn’t pick this one?) has kindly consented to be my next Pre-Famous Author interviewee! I’ve gotten to know Heather on blogs and Twitter, which I guess is an okay substitute for knowing her in real life. Before we get to the interview, here’s some background on Heather.

A Clearwater, Florida resident (by way of Pennsylvania and New Jersey), Heather works as the associate editor of an extremely exciting business-to-business insurance magazine. Basically, her life is the female version of Jason Bourne, if Jason Bourne worked for a magazine. She spends a lot of time beating up evil insurance adjustors and breaking into hotels to uncover the latest health benefits available, which she then passes on to businesses and companies via the magazine.
Okay, maybe not. But we can pretend.
When she’s not working or writing, she reads. Or eats. Or makes food that she will eat later. She doesn’t have cable, so she watches a lot of Hulu and is really into Lost. Also, she and I are kindred spirits because she enjoys Arrested Development, which is basically the best show in the world. (There’s always money in the banana stand, right Heather?)
After having her first 25 pages torn apart at a writer’s conference, she’s currently editing her WIP, which she describes as a “YA novel set in a dystopian future where there’s no natural disease or death. So the government creates a way to control the population, which our lovely female MC is involved in, and chaos ensues.” Sounds awesome, doesn’t it?
Alright. Ready to get to know her a little better? Me too!
*          *          *
Anne: If you could live anywhere in the world, where would it be?
Heather: This is a tough question. I studied abroad in Italy and I loved it there, so that’s my first instinct. But I love to travel, and I would want to have my friends with me everywhere I went, so I would probably just move every six months to different places all around the world. That way I could visit the people I know who live all over the world. Some days I feel like a city girl, other days I feel like a country girl. I would love to live in the mountains. I live five minutes from the beach right now but I almost never go (and it shows), so I would probably skip the islands.
A: Suppose you could only have one book for the rest of your life. You would choose…?
H: Since they haven’t released the complete Harry Potter series in a single-bound edition yet, I guess that doesn’t count as one book. So I’ll say Harry Potter and the Prisoner of Azkaban. I’ll also say that I think this is a very mean question, because having only one book for the rest of my life would be torture (even if it was Harry Potter).
A: You’re right. But secretly, I enjoy torturing people like that. *evil cackle* No, just kidding, don’t leave! Okay, next question, before I scare you again. What is your biggest quirk?
H: All of the money in my wallet has to be facing forward, upright, and in numerical order (smallest bills toward me). It can’t even go in the wallet the wrong way for a few seconds. I’ve held up lines trying to put it in the right way when cashiers hand it to me all messy.
A: Um, remember how I said we were kindred spirits because of the Arrested Development thing? It looks like we share the same OCD tendency, as well. Hmm. Anyway, what other unique thing about yourself can you share with us?
H: I married my high school sweetheart, who I met on a blind date…at Denny’s…when we were 16. My best friend, who is still my best friend, and was my maid of honor, set us up.
A: That is great! It’s like a movie or something. Bless. And at Denny’s, too. Moving on… What is one thing you would never, ever do?
H: Um…crystal meth? Honestly, I’m in the camp of “I’ll try almost anything once,” so even though there are things that truly terrify me, I would still try them, especially if I had some friends along with me.
A: Wow. You’re braver than I am. And I think it’s cool that you would try anything once. Unless that thing is crystal meth, in which case I suggest you stay far, far away. On a completely different topic, who is the author you admire the most?

H: I admire a lot of authors for different reasons. I admire J.K. Rowling for her world-building, charity work, and general awesomeness. I admire Megan McCafferty for the fan outreach she does, especially through social networking. I admire the tenners, who really put themselves out there and are promoting themselves like crazy. I admire Justine Larbelestier because she’s so outspoken (in an intelligent way) on her blog. I really could go on and on…and if I love a book, I admire the author who wrote it, just for being incredible.

A: What about the characters you write? Which one do you identify with the most?

H: There is definitely a little bit of me in all of my characters. For this WIP, I would say Finley, who is the female MC’s best friend. I have one for a future project who reminds me more of myself than anyone in my current WIP. I used her character in the scene I wrote for the No-Kiss blogfest.

A: Ah, the No-Kiss Blogfest. Good times. So, what would you say is your biggest challenge as a writer?

H: Plot comes pretty easy to me. I think my biggest challenge is being descriptive without being cheesy. I stay away from adverbs and all that jazz, but I still have to revise my descriptions repeatedly before I think they’re good enough to show anyone, and even then I get comments back that make me think they’re not working. But I’m getting better; the more you write the more you learn, so all I can do is keep writing.

A: So true. Good luck Heather, and keep in touch with us in the future!

Isn’t she fun? I have loved getting to know Heather, and I know you will too! Here’s how you can find her out there on the interweb:

Do yourselves a favor and stay in contact with this girl – she’s going to make it big someday!

If you would like to participate in the Pre-Famous Author Interview series, let me know by leaving me a comment on this page, tweeting me @AnneRiley, or emailing me at annerileybooks AT gmail DOT com. I would love to interview you!