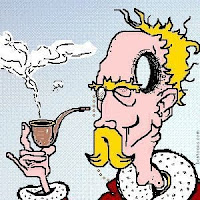 I can’t think of anyone better to kick off the Pre-Famous Author Interviews than Mr. Boudreau Freret! I have found him to be charming, witty, and always full of helpful advice when you need it. We’ll start with a little background information, and then we’ll move on to the interview.
While he’s fairly confident he wasn’t born in the woods, he was born near them, somewhere in the northeastern part of Texas. He has since traded trees for beaches in his current home state of Florida, where his day job involves writing about things that “have great significance to a small number of people, and no significance to anyone else.”

When he’s not writing for work or for pleasure, he hones his mad guitar skillz, hangs out on the beach, or plays a wide variety of card and board games.
Unlike the great majority of us, Boudreau is a published author several times over. He writes mostly short fiction and non-fiction, and while most of his work can be found online, he also submits to print publications which, according to Boudreau, “seem to be waiting until this whole 2012 thing blows over to either accept or reject.”

In March, Boudreau will be conducting a workshop at Colorado State University – Pueblo, where he will educate young (and perhaps old) minds on “writing flash fiction as a means to develop critical thinking and writing skills, regardless of genre or format.”
As far as his current WIPs, Boudreau has a couple dozen small projects going simultaneously, as well as an upper-middle grade science fiction novel and an adult novel (not that kind of adult) that “aspires to be literary fiction when it grows up, but of course that remains to be seen.”
I sent Boudreau a list of questions that I felt would allow for a deeper look inside his head. Although judging from the picture, I suppose we could have just looked into the ginormous hole in the side of his skull, but this is way more fun.
Anyway. Read and enjoy!
*          *          *
Anne: If you could live anywhere in the world, where would it be?

Boudreau: Probably in my own skin, in part because it is a happy place that I’m both fond of and accustomed to, and honestly the alternatives are unsettling, if not outright creepy. Geographically, I’d have to say on the planet’s surface, but I like to travel, so it all feels like home to me. (I would prefer not to be beneath the surface, at this time.) More specifically, somewhere warm. I’ll visit snow occasionally, and then go home, thanks.

A: Suppose you could only own one book for the rest of your life. Which one would you pick?
B:A Comprehensive Directory of Every Lending Library in the World [With Maps!]
A: I’m sure the answer to this is no, but… any funny little quirks?
B: When I imbibe ethanol, I break out in spots. (For example, Chicago.)
A: Tell us something unusual or unique about yourself. Aside from the spots, I mean.
B: I spend an inordinate amount of time studying a board game called Advanced Squad Leader. I can’t play it because I do not understand the rules. But I can talk about it for hours and hours, sometimes with a modicum of credibility.
A: What is one thing you would never, ever do?
B: Say never.
A: Any pet peeves, either in writing or life in general?
B: Yes, but not any that I would admit.
A: What would you say is your biggest muse?
B: People inspire me. Beyond that, I’m mum as to my muses. 🙂 And music adds fuel to the process of writing. As does root beer and Skittles.
A: What author (dead or alive) do you admire most?
B: Benjamin Franklin. Don’t get me started. Unless you’ve got a few hours.
A: Which of your characters do you identify with the most?
B: I don’t think I can play favorites, and I’m really not sure if there are any I identify with more than others. I don’t write characters that I don’t identify with, I’m not sure that I could. (I think, probably, the twenty dollar issue is whether or not anyone else can identify with these characters. And the funny thing about that is that it is out of my control. Ironic, huh?)
A: What is your biggest challenge as a writer?
B: Time. I’d really like more of it, to write. Even if the words on the page are never seen by other eyes, I really wish I could chase every rabbit I glimpse down every trail.
Isn’t he great, folks? If you want more of Boudreau Freret (and really, who doesn’t?) you can find him online in various and sundry places.

And don’t forget to sign up for that workshop at CSU Pueblo!
If you would like to participate in the Pre-Famous Authors Series, please let me know! You can either leave me a comment here or tweet me @AnneRiley. I would love to have you!