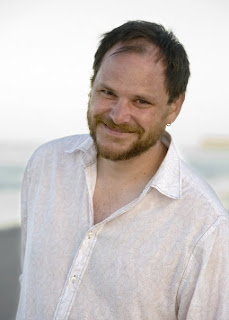 When Dean Mayes first emailed me to ask if I would review his book, I had no idea that our initial interaction would grow into the online friendship we’ve enjoyed over the past month. Dean is such a fun, sincere, and gracious guy, and I’m so glad his email made its way into my inbox!

Before we start the interview, let me give you a little background on Dean, because there are several very cool things about him. First of all, he lives in Adelaide, South Australia, which is awesome because when I was younger I used to stare at Australia on my map and wonder what it would be like to live there. I might have been be a geography nerd.
Secondly, he’s a pediatric ICU nurse. I have absolutely no capacity for medicine, especially the pediatric kind… or the intensive care kind… so I can’t even imagine the type of days/nights he must go through sometimes.
When he’s not writing, he enjoys cycling, swimming, reading, music, and taking care of his two children that aren’t cute at all.* Nope. They don’t look a thing like tiny ewoks. Not a bit. And I definitely don’t want to snuggle them and make baby noises at them and maybe eat them.** And he has a wife, who’s not a bit beautiful. I don’t covet her hair.***
*This might be a lie.
** Sometimes he posts pictures of his kids on Facebook and I make baby noises at the pictures. It’s all I have. Don’t judge.
*** She is positively gorgeous and I do, in fact, want her hair.
What? Oh. Right. So anyway, this is the coolest part. Are you ready?
He. Is. PUBLISHED!
His first novel, The Hambledown Dream, was first published in digital format only – but as of this week, it is available in print! He’s actually accomplished what so many of us dream about, and I’ve had so much fun tagging along on this journey, if only in a small way. And also from very far away.
So now that you know a little about him, let’s hear what Dean has to say in response to my oh-so-professional interview questions!
*          *          *
Anne: Hi Dean! So glad to host you here on the blog. Let’s start with a simple question. If you could live anywhere in the world, where would it be?
Dean: The Adelaide Hills in South Australia. To me it’s one of the most beautiful parts of the world and I feel very much at home there.
A: Mmm. I want to go to there. What if you could only have one book for the rest of your life? What would it be?
D: Robert Kennedy and His Times – because it is loooooonnnnng!
A: Any quirks you’re willing to admit to?
D: I have recently discovered that I cannot walk past a bookshelf without arranging the books on it so they are perfectly neat and run in order of size. I do this with my children’s bookshelf the most. It is really disturbing.
A: Um, yeah it is. Who does that? Pssh. Oh, okay, I do it too. Except I like the books to be placed so that the sizes vary randomly, like a city skyline. I’m edgy like that. Anyway, what else can you tell us about yourself that is unique or unusual?
D: I have no sensation in my left leg at all. At 15 I was diagnosed with a rare form of spinal tumor and as a result of surgery, my spinal cord was damaged so that I can no longer feel my leg.
A: Is there anything you would never consider doing?
D: Cross dress. I have an awful body shape for cross dressing.
A: Ha! I think that is probably a good thing, since you’re a man. It would be unfortunate if you had really great hips for a form-fitting dress, know what I’m sayin’? Anyway, let’s move on to the author-y questions. What author, dead or alive, do you admire the most?
D: Simon Winchester. He has the most innate ability to turn potentially boring subjects into the most fascinating reads.
A: Which of your characters do you identify with the most?
D: Denny Banister from The Hambledown Dream. He has a passion for life even though his is cut short. I think as I get older my passion gets stronger.
A: What is your biggest challenge as a writer?
D: I think dialogue. I wrestled all the time with trying to make the dialogue sound natural, organic. It was a maddening process. I got to the point where I was observing people’s conversations in real life in such a way that I was like Judge Rienhold’s character from Seinfeld – I’d end up getting right into their personal space just so I could observe them at close quarter. Freaky.
Ha! Now I’m picturing Dean as the Close Talker from Seinfeld. Getting centimeters away from people’s noses as they try to have a conversation. Priceless!
If you would like to join Dean on his journey as a published author, here’s where you can find him:
Thanks for the interview, Dean!

If you would like to participate in the Pre-Famous Author Interview series, please let me know by leaving me a comment on this page or tweeting me @AnneRiley. I would love to have you!